Today started, as I said last night, bright and early. I didn’t get much sleep, so I spent a lot of the day in a haze and not feeling well, but I still really enjoyed the city of Toledo we explored for most of the day.

My program took us there by bus, and I was lucky enough to wake up just as the sun was rising. Sunrises in buses have been a real highlight of this whole experience. Then I went back to sleep and woke up again when we were near mountains that looked luscious and blue shrouded by fog. I took a moment to recognize that Spain is beautiful and then went back to sleep. After one rest stop, we finally made our way to Toledo.

I actually learned about this city last week in my culture class. It is very famous because it is the only city in Spain where three of the major religions, Islam, Judaism, and Christianity, all coexisted peacefully at the same time. People were safe to come to Toledo because they accepted many people and many different beliefs, which is why it is sometimes referred to as “Toledancia” instead of “tolerancia” or tolerance. That was until 1492 when Sephardi Jews, or Jews from Spain, were expelled from the country or required to convert. For these reasons, Toledo is a city rich with history and architecture from inspired by those three religions.

We first stopped for a beautiful overview of the city and to see the only Roman bridge in Toledo which was named “the bridge” in Arabic because there is only one. There was a small castle built next to it in order to protect the bridge. 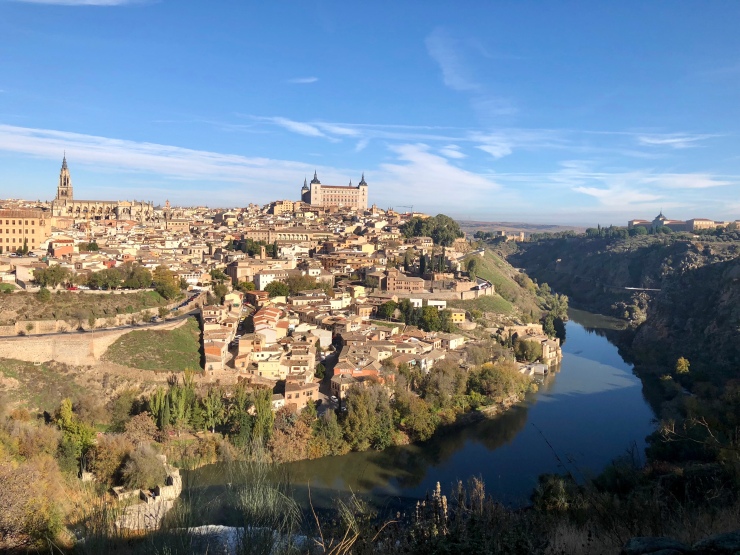 After this, we saw my favorite part located in the historic Jewish area of the city: the synagogue. When we first walked in, my roommate was very confused because she said it didn’t look like a synagogue, it looked like a mosque. Then, our tour guide pointed out a cross hanging on one of the walls, which isn’t a normal part of Judaism.

According to our guide, when the Jewish community wanted a newer synagogue built in the 1100-1200’s, they sought out an architect that they knew could make something beautiful. As it turned out, that was the Muslim architecture. So, a Muslim architect was commissioned to create the synagogue for the Jews, and having never been allowed to see a synagogue, created something he was familiar with, and it turned out to be a gorgeous synagogue with Muslim influence. Then, when Judaism was banned in 1492, the synagogue was converted to a Christian church, thus the cross. It had several other purposes throughout the years, but today it remains solely a landmark. It no longer functions as a synagogue because there aren’t enough Jewish people still living in Toledo.

We also saw a monastery that had a wall of chains on the front of the building. These were the chains of prisoners of war from two combating religions who came to Toledo seeking safety and found it. 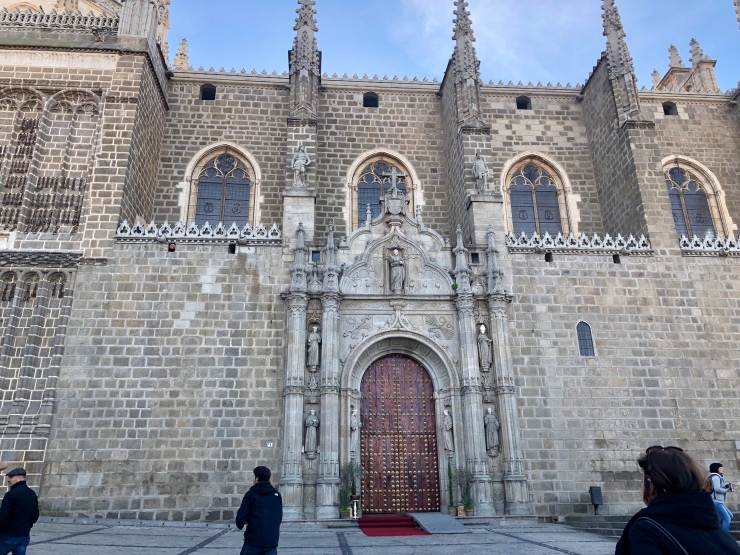 We stopped into a church to see a very famous painting, “El Entierro del Señor de Orgaz.” If you’re interested, you should look it up. It’s very beautiful, but we weren’t allowed to take pictures. Our guide explained most of the figures in the painting. Then we walked to the cathedral in the center of the city.

Then we were allowed free time, which I used to sit with a view and some of my favorite people in the program to eat our lunches. Then we walked around shops until it was time to leave.

Then we drove for an hour to Madrid where we’re spending the night and exploring tomorrow. I’m still tired, so I decided to find a dinner within walking distance with two other girls. We found a Mexican restaurant and ate tacos, quesadillas, burritos, and strawberry cheesecake. It was pretty good, though interesting because, for Spain, eating at 6pm is very early and we were the only ones in the restaurant. 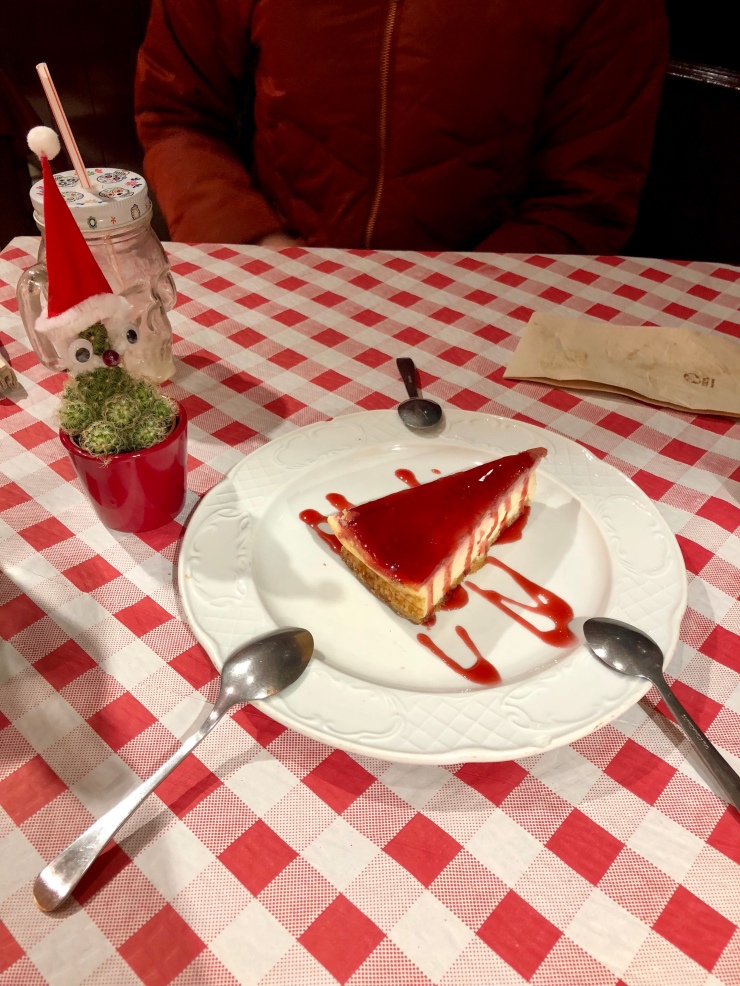 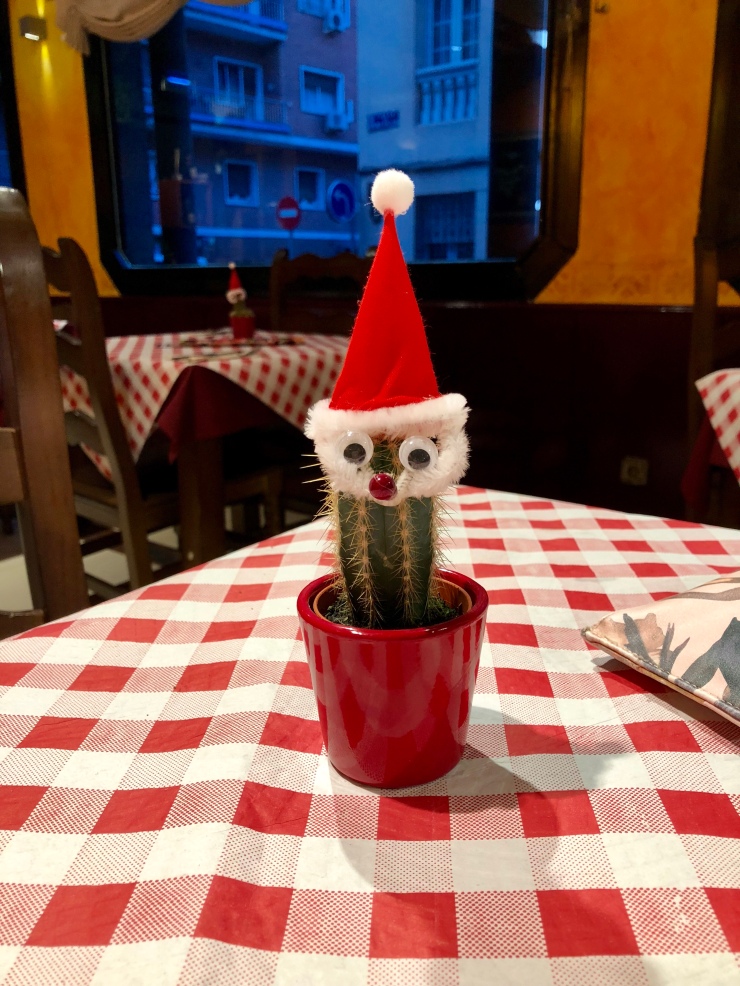 Now I’m back at a crazy, modern, yet really nice hotel snuggled up for sleep very soon. Tomorrow we will spend time in Madrid and then head back to Salamanca for dinner (at normal Spain time). Until then!

One thought on “Day Eighty Seven: Toledo, City of Tolerance”